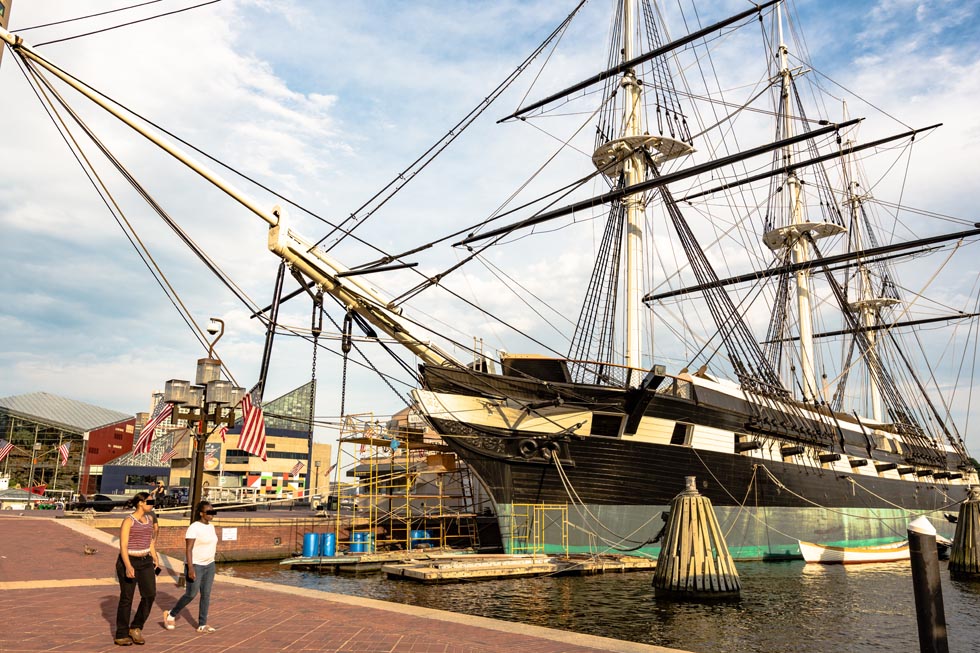 The Question of the USS Constellation 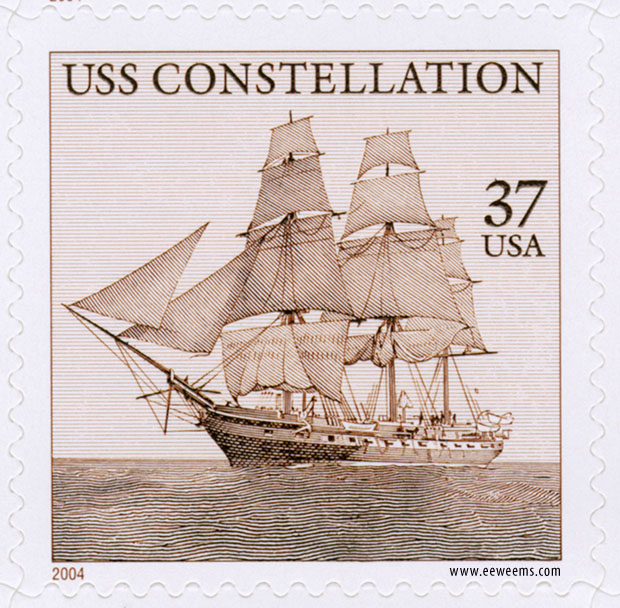 The U.S.S. Constellation is the source of a remarkable, and long, controversy in wooden ship circles and in U.S. Naval history in general. Originally authorized to be built by the United States Congress of 1794, the completed "frigate" class wooden ship was underway and being used in 1797. Retired in 1845 and "broken-down" in 1853, a second USS Constellation was built and floated as a "war sloop." That's where the uncertainty in history begins. As you can see from the excerpts shown below, the argument can get a bit heated between the two sides. Both sides claim that they have found the one indisputable piece of evidence that proves their side right once and for all, but the more likely truth is that we may never know the definitive answer. 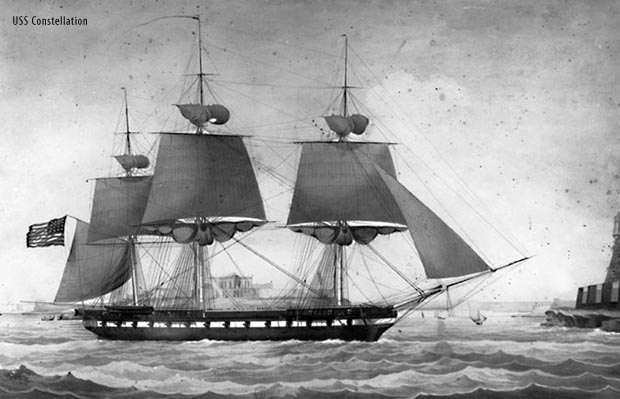 Enlarge to view the historical print image of the USS Constellation

Was the second USS Constellation an entirely separate ship built with some timbers and parts from the first ship with the name, or is the second ship really just the first ship radically rebuilt and designed? This is the argument which still is argued, with two sides battling the other with books, papers, opinions and research.

"Built in Baltimore in 1797 under orders from President George Washington, USS Constellation is one of America's first warships, and according to this new study, remains the nation's oldest surviving warship. With the book's publication, wooden shipbuilding authority Geoffrey M. Footner believes he has put to rest a decades-old controversy among naval historians, the U.S. Navy, local governments, and various historic ship foundations. He argues that though greatly modified since built by David Stodder, the ship now berthed in Baltimore's Inner Harbor is indeed the original Constellation. His well-documented study offers what many believe to be the final word on Constellation's provenance."

Then there is the technical analysis and rebuttal to the book from Dana Wegner at the David Taylor Research Center, apparently holding the view held also by the actual USS Constellation floating museum in Baltimore, Maryland:

"In 1991 I was a member of a small, interdisciplinary team of historical investigators from the Navy’s David Taylor Model Basin that discovered new, clear, and simple evidence which, we believed, permanently resolved the notorious “Constellation Question.” We found that the Constellation that surrounds us tonight is an 1853 sloop-of-war built near Norfolk to an entirely new design, containing a small amount of hull material from the old frigate of the same name. Our hosts today properly display and outfit her as a sloop-of-war. Since the 1991 publication of our official 200-page technical report called, Fouled Anchors: The Constellation Question Answered, we have contributed several more journal articles and have continued collecting information about the two Constellations. After over a decade there are some things in the report which should be updated, but we have not changed our original evidence or our conclusions.

First of all, the central contention of the book Frigate to Sloop is not new. It merely repackages the same basic idea the 1797 proponents of the ship have always resorted to since before 1961...

...In preparing our 1991 report, with the help of the FBI and the Bureau of Alcohol, Tobacco and Fire Arms, we discovered that most of the historical documentation used up to that time to defend the 1797 origin of the ship had been forged. We determined that, in all likelihood, the forger was a particular, now-deceased, longstanding employee of the ship and that most of the forgeries were created by him between 1956 and ’65. Seeking self-importance, the forger attempted to defend the 1797 origin of the ship and bolster efforts to change the sloop into a frigate...

Until our 1991 report the forgeries had fooled or perplexed experts for decades. Judging by Frigate to Sloop, sadly they continue to hoodwink the unwary or desperate...

Frigate to Sloop accuses us of sucking the life out of this great ship and reducing it to a pile of technical drawings and calculations. But be assured, had our 1991 report never been published, the ship would not be in the fine condition she is in today and under the competent stewardship of her stellar and enlightened staff. Without our report she might not be here in Baltimore. She might not be anywhere today. Our honest dedication to Constellation the ship is evidenced by the fact that we pursued our investigation knowing full well that it would surely bring down upon us political turmoil, professional, and even personal attacks. "

Backing this up is a November 2007 report from the former curator of the USS Constellation Museum, Glenn F. Williams:

"...following the "paper trail" of Navy documents concerning
the project [the 1853 construction] , e.g., issuing pre-cut members, disposal of the "salvage," payroll of construction and demolition workers, etc., there are surviving contemporary newspapers with articles describing how the frigate was "broken up," or scrapped in modern terminology, at Gosport, [Virginia] while 150 yards away in Ship House B, the keel of a new CONSTELLATION was being laid for her "substitute." Classed as a "sloop-of-war" (or "corvette"), she was larger than any other vessel in that class (and larger than the frigate of the same name, by the way), so she was manned and equipped under the table of allowances for a "razee frigate."

But immediately following those online remarks of Williams is a rebut by reader Bill Trout:

"According to Alan Flanders' book JOHN L. PORTER, NAVAL CONSTRUCTOR OF DESTINY, John Porter rebuilt the ailing USS CONSTELLATION in 1853-54. If this is correct then the CONSTELLATION is the original one, but something like the original hatchet which had the handle and head replaced several times."

And so the argument goes on. 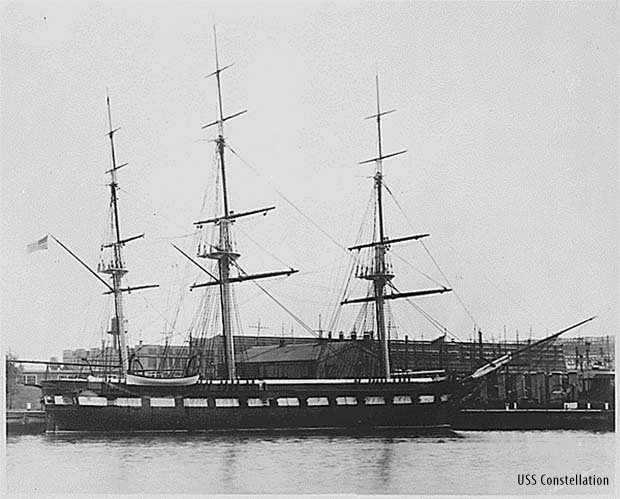 Called "The Yankee Race Horse," the USS Constellation is categorized as a corvette (or "war sloop") which now resides as a tourist attraction in the Baltimore inner harbor, where for $8.95 (adults) you can inspect a rare floating museum of nautical history (they also have nearby the submarine USS Torsk, the Lightship Chesapeake, the Coast Guard Cutter Taney, and the Seven Foot Knoll Lighthouse.)

Launched August 25, 1854, then commissioned July 28, 1855, Constellation was used as the flagship of the Atlantic fleet, also as a diplomatic vessel in the Mediterranean, and then as an armed deterrent to slave ships intending to reach America, sometimes capturing such craft and freeing their captives to Africa.

After the upheaval in naval strategy following the advent of ironclads in the American civil war, the Constellation was reduced to an all-purpose craft which ferried supplies, served as a floating barracks, and then as a training ship for world war I era sailors, and finally a training ship for Annapolis midshipmen at the Naval Academy in Maryland. She was mothballed in 1933, but was put back into official service in 1940 as both a functioning craft, but more importantly as a symbol of naval history and America military tradition as the United States faced the brink of war spreading from European and far east conflicts. She was unofficially considered to be the actual original Constellation of 1797, though contrary opinions were also put forth, some dating back to at least Admiral George H. Preble's 1872 remark that the original Constellation was "now represented by a new ship bearing the same name. " The argument about the crafts true provenance were well underway.

The Navy establishment was long committed to maintaining the Constellation in some form (like the equally famous 1797 ship USS Constitution "Old Ironsides"), though the ship again was decommissioned and stricken in 1955. Declared a National Historic Landmark in 1963, she was tied up at pier one of the Baltimore Inner Harbor, where she was a tourist site, though deteriorating until a complete overhaul and rebuilding was done in 1996 at a cost of over $9 million USD. In 2004 the ship was put to sea as a functioning craft for a short trip to Annapolis and back.

The original U.S.S. Constellation was authorized by the US. Congress in 1794, built by Sterrett Shipyard, Baltimore, Maryland, and launched on September 7, 1797.

Used as a warship in various conflicts, this 38-gun frigate circumnavigated the globe in 1840, returning to the West Coast in 1843. Soon after laid up at Norfolk, Virginia, she was broken down in 1853. This craft was 1,265 tons in weight, 164 feet long, with a 340 men complement. Intended as a particularly robust frigate, this vessel was meant to defeat the typical French or British frigate of the day, but with the lines and rigging of a fast vessel that could outrun the heavily armed "ships of the line" that were armed so heavily that nothing in the nascent American Navy could face them. (The U.S. Navy eventually produced its own "floating, mobile fortresses" in 1814. Congress had attempted to create six large 74-gun naval ships in 1799, but could not come up with the money to finance their building.)

A battlecruiser (Lexington Class) with this name was announced in 1917, but was finally cancelled in 1923 and never built.

More: The Question of the USS Constellation