THE FLORENTINE PAINTER AND SCULPTOR OF HISTORY

Michelangelo and the Pope's Ceiling 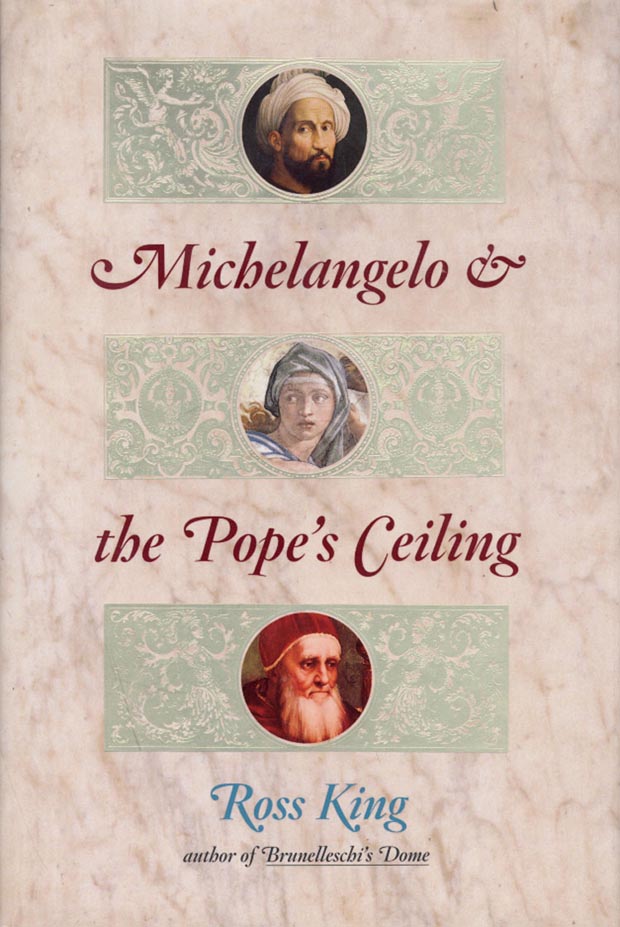 Michelangelo's fame as an artist is assured even if one discounts, or even eliminates, the Sistine Ceiling frescos. The David sculpture & the Last Judgment fresco would probably be enough to keep art historians and the art-minded public occupied with the life and works of the phenomenally talented, but (as Ross King demonstrates repeatedly in this book) hopelessly cantankerous Florentine artist.

Even so, the central work of Michelangelo's career (not to mention his most famous) is the Sistine Chapel ceiling, and in it one can see the elaboration, and embellishment, of the themes Michelangelo pursued in every aspect of his art, that is, chiefly the human figure as a demonstration of idea & theology.

That theology would change, and ultimately be partially repudiated, by Michelangelo later in life. But at the time of the Sistine Ceiling painting he was as certain about the permanence of the nude as a vehicle of expression as he was about his own position as the finest artist in Rome, and in the imagination of his mind, the universe at large.

Quite apart from the usual academic studies of Michelangelo that tend to soften up his eccentricities and that of the other characters who swirl around the tale of the Sistine's painting, King's book instead weighs in heavily on telling of the sheer physical labour involved in classical sculpture and painting. The covering of a suspended surface like the Sistine - - a 12,000 square foot vaulted ceiling - - required more than just the fortitude of an acrobat; fresco was a daunting regimen, requiring muscle (Leonardo da Vinci:"a most mechanical enterprise, accompanied with a great deal of sweat"), good timing since the artist must work while the plaster was wet, a knowledge of chemistry (hydroxide calcium produced by heating limestone, then fixed with sand), and, at least in Italy, no particular fear of heights:

"Fresco painting occasionally produced casualties, such as the fourteenth-century painter Barna da Siena, who was said to have fallen almost one hundred feet to his death while frescoing The Life of Christ in the Collegiata in San Gimignano.

...Giovanni Paolo Lomazzo, likewise saw fresco as a distinctly masculine pursuit, insisting that tempera painting, in comparison to fresco, was the domain of "effeminate young men."

Fresco is a term meaning "fresh," and in all these already mentioned demands of muscle and science, it was a technique that allowed the artist only one shot at getting the painting right. Screwing up meant scraping off the several layers of accumulated base and plaster that had to be applied perfectly and aged right before even beginning with the first daub of paint. The entire procedure took a great deal of organization for even the smallest project, and a scheme for doing the Sistine meant a multiplicity of details that was a continuous management headache to the reclusive and obsessive artist who preferred working alone as much as possible.

With troops of contractors and assistants helping in all the preliminary work, Michelangelo still had to contend with his benefactor (or nemesis, depending on how you look at it) Pope Julius II, his architect Bramante (who thought Michelangelo could not be trusted with such a gargantuan project, and was ready to say so), and of course Raphael, the rock-star like painter (dead at age 37 from "excess of living") and society darling who, in his list of geniuses and skills, could rapidly incult another painters style. He was an adept young man who knew how to pull strings to get the commissions he wanted, and when he saw the first half of Michelangelo's Sistine fresco, he coupled his admiration with preliminary maneuvering to get himself named as replacement to paint the second half.

In stories of Michelangelo, it is cliche' to say that he did not want the Sistine project, that he indeed thought painting a lessor art and sculpture the real domain of great talent. Though Michelangelo thought so, and even said so, it is obvious that the scope of the work, and opportunity, with the Sistine, and perhaps most of all, the near impossibility of doing it well, compelled him. His pride and arrogance, as King is not shy about mentioning in this book, responded to challenges, and his temperament to untried ideas. That the whole effort could have dissolved into a mess is never far from the enterprise, as King quickly and carefully shows that Michelangelo's resume before the Sistine is spotted with a number of failures and aborted assignments. Particularly funny is the "dual of equals" in which Michelangelo and Leonardo are commissioned to do frescos across from one another at the Palazzo della Signoria. As happened often throughout Michelangelo's career, he is pulled off the project before really even starting, and Leonardo, experimenting with new painting substances, hopelessly botches his effort.

Ross King handles all these warring personalities easily, leading them (and us) through the background of Rome in the early 1500s, supplying many anecdotes, facts, and finally presenting a whole picture of how, at least at one time, art & artists were at the crux of the motion of Western civilization.

A Summary Opinion: For the reader (who may be just somewhat) familiar with Michelangelo, opening this book at just about any section is immediately engrossing.

Michelangelo's Racantation of the use of the nude in art

Michelangelo and Amannati's Renunciation of the Nude in Art